Well – it was only a matter of ‘time’ before I posted on procrastination.

…Here I sit with my list of things to do and a blank page, while wearing this t-shirt… 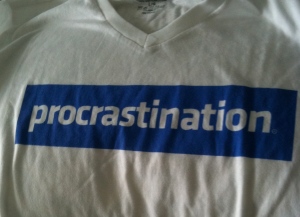 So I thought I’d start by seeing what Calvin* is up to since we left him last during his brainstorm: 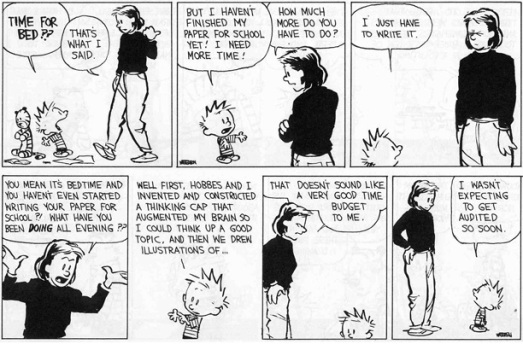 My supervisor has researched procrastination and found links with self-efficacy and self-regulation. All these topics of motivation are of interest to me…and maybe ‘one day’ – haha 🙂 – I’ll explore procrastination through a research project.

One of his research articles** begins with a quote from James (1926):

-William James in an 1886 letter to colleague Carl Stumpf-

So… it’s not a new thing. Not a phenomenon created by the existence of Facebook. Yet there is still a lot to learn about procrastination:

…that universal, intentional yet irrational delay of an intended course of action, in spite of an awareness of negative outcomes…such as test and social anxiety, fear of failure, depression… (Klassen et al., 2008; 2009).

However, researchers have also reported that it is beneficial for some students – those who work well under time pressures.

Given that it is predominately a problem in academic settings (70-95% of undergraduate students experience problematic procrastination), it is no surprise that PhD comics (…the website I go to when procrastinating…) frequently portrays this topic graphically: 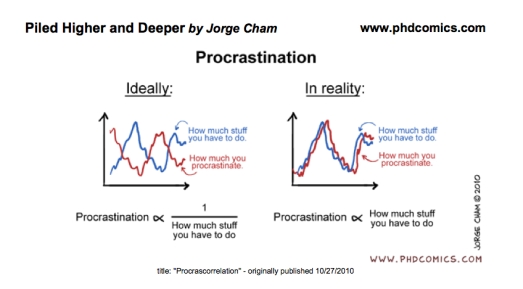 Thankfully, I have a motivating and supportive supervisor for this PhD journey

I also have lots of interesting things to do and read about!

So…I may find that, more and more, I won’t have ‘time’ to procrastinate 🙂