Lately, I have been trying to reconcile my definitions of vulnerability.

I have generally used vulnerable in reference to someone or a population group less fortunate in some way. Often this label describes a lack of something, such as protection against difficult circumstances, without a sense of control.

According to the World English dictionary (on dictionary.com): 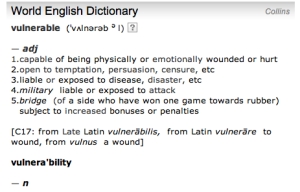 What about the role of proactivity as opposed to passivity?

Although the lack of something frames the experience of vulnerability, there are strengths – like resilience.

Young economically disadvantaged children have been described as socially vulnerable. This summer I am working* with Families First Edmonton – a CUP project aimed at discovering how to best support low-income families in Edmonton through social programs and services.

*thanks to a research award I received from the Women and Children’s Health Research Institute (WCHRI) and the Community-University Partnership (CUP) for the Study of Children, Youth, and Families

The Early Child Development Mapping project (also through CUP) – is collecting information on Edmonton families considered vulnerable due to income levels, unemployment, immigration, and language background. (Here’s a recent newspaper article reporting on this project and that 1/3 of Edmonton children are starting school a step behind).

Recently, Brené Brown (via 2 TED talks – posted below)
has helped broaden my view of vulnerability:

“Vulnerability is our most accurate measurement of courage
…the birthplace of innovation, creativity and change”

When I think of my friend Tania, courage and creativity always come to mind – especially when she openly blogs about her own vulnerability.

Through another quote from Brené Brown:
“The willingness to do something where there are no guarantees”

– I am reminded (…well, I never actually forgot!) that vulnerability was at the heart of the uncertainties my friend Ashleigh experienced during her lengthy (3 1/2 years…) roller coaster of an adoption process. Through her vulnerability (which she shared openly on her blog), she was able to welcome home a child – the most bright and beautiful, trusting and loving, giggly and strong girl! – from one of the world’s most vulnerable environments. And although known as a vulnerable environment, the strong beauty of Ethiopia and its people captured Ashleigh’s heart, so much so that I recall her saying (…and forgive me, I’m not as eloquent as she at blogging) that ‘it is not Ethiopia that needs ‘saving’ by Western standards but we need Ethiopia.’

We can learn so much from the persistent beauty of their culture.

So, I am beginning to see vulnerability from a strengths-based perspective. It takes courage to be vulnerable – to be open and trusting within uncertainty.
It takes courage and creativity to overcome difficult circumstances – especially in situations seemingly beyond control or hope.

While at a conference in San Francisco, I had the opportunity to attend 4 (!) presentations by one of the most famous contemporary psychologists: Phil Zimbardo.

Although well-known for his Stanford Prison Experiment (40 years ago), it was the passion for his new chapter of research that held us all captive …ok, pun intended 😉

Instead of studying how good people can turn bad when placed in negative situations (“the bad barrel” as opposed to “bad apple” theory he says), Zimbardo is focusing on how people can overcome – transform – a negative situation.  By transform, he referred to those who don’t just escape or ignore/stand by, but those ‘everyday heros’ who bravely make a change.

He introduced us to many heroes during his presentations through images and by relaying stories, but it was one young man’s vulnerable presence and passionate storytelling that brought the power of everyday heroism to life.

Rudy, an ex-gang member, former felon, and recovered drug addict, spoke of how we can be transformed by and be a transformational influence from within a vulnerable environment. 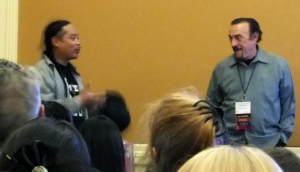 “a violence prevention and youth leadership organization that works with San Francisco’s hardest to reach youth through case management, street outreach, in-school services, recreational activities at community centers, and support to incarcerated youth. United Playaz is committed to improving the lives of young people surviving in vulnerable environments, show high incidence of truancy and low academic performance, or have been involved in the juvenile justice system through direct service and community collaboration” – http://unitedplayaz.org/

Rudy is a hero trying to draw out the courage of youth to be catalysts for change within vulnerable environments.

Zimbardo is a hero for developing educational programs aimed at heroic transformations (http://heroicimagination.org/), so students aren’t just surviving, but thriving.

Tania is a hero showing the power of vulnerability by authentically telling her story with her whole heart
– and consequently inspiring others to practice vulnerability.
Through her pain and discomfort she reveals strength, gratitude, and joy.
She makes being vulnerable look beautiful.

Ashleigh is a hero because she recognizes that we live in a vulnerable world.
Instead of complaining, blaming, or trying to numb it – she chose to love wholeheartedly the children of Ethiopia even when there was no guaranteed adoption outcome.

With emotions exposed through her own vulnerability,
she chose (and continues) to dare greatly.

She gives action to Brené Brown’s words:
“children are wired for struggle, but worthy of love and belonging.”

I find purpose in my research with Families First Edmonton because the project is dedicated to supporting vulnerable populations.
I choose to approach my work this summer from a strengths-based perspective.

To discover and learn from the beautiful and resilient qualities held by vulnerable populations.

For more on this topic, I highly recommend Brené Brown’s TED talks:

The Power of Vulnerability:

PhD Journey by Tracy Durksen is licensed under a Creative Commons Attribution 3.0 Unported License.
Based on a work at https://motivated2learn.wordpress.com.
Loading Comments...