In one week, I will be on a plane to the UK!

Thanks to funding from my supervisor and a Green and Gold Student Leadership and Professional Development Grant I am really looking forward to my first trip to the UK where I will be presenting a poster at the British Psychological Society conference in Harrogate and learning more about eye-tracking research through PERC at the University of York.

I first mentioned eye-tracking here in my post about favourite teachers. I will post more on this topic in the near future 🙂

As I prepare for my trip, I am reminded of “Ping Pong” the penguin’s first trip to England! …don’t worry…I’m just a former primary teacher…

One of my favourite animals is the penguin.
About a month ago while begging teachers to please fill out our research survey collecting data at a teacher convention, I wandered past a booth advertising school programs from West Edmonton Mall’s Marine Life…and there stood a penguin! 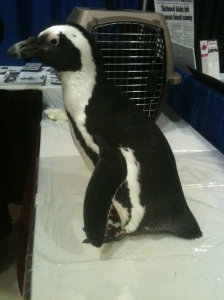 “Doug” is an African penguin
(who was originally thought to be male until she laid eggs)!

I loved studying penguins with my K/1 students and we enjoyed the book “Mr. Popper’s Penguins” by Richard Atwater (long before Jim Carrey took on the role of Mr. Popper). One day, I surprised my students with a ‘post-marked’ box on a cold January day – and inside we found Ping Pong, a penguin who travelled with his favourite penguin books and a disposable camera!

He learned a lot and took pictures each time he went home with a student. I still have the journal of his adventures written by the students and an adorable photo album of Ping Pong’s poses (he even appeared in our school’s year-end DVD).

He played in a pet rabbit’s cage, hid in a freezer, enjoyed snacks,
made new friends with dolls…

…and we even found him hanging over our baby salmon
– who thankfully continued to grow and were later released in Goldstream Park!

So many delightful photos that year.

Just as I enjoyed seeing their faces in the photos with Ping Pong, I can still recall the look on their faces when a real post-marked box arrived on a warm day in June (when our penguin study was but a memory)…with Ping Pong, a letter, and a few photos enclosed! 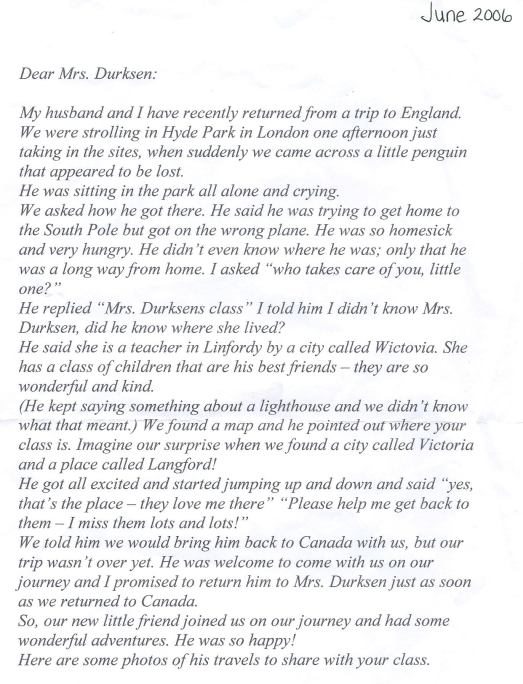 …now that enough time has passed, I guess I can tell you a secret – that package was from my aunt. I asked her if she could bring Ping Pong along to England and take a photo or two with him – but I never expected such a delightful letter and the postal return of Ping Pong to our school!

Well…I really wasn’t that surprised…you see, I have a wonderfully imaginative Aunt who used to send me postcards from her “Bear” when I was a child.

I found my “Bear” when we moved to Alberta… 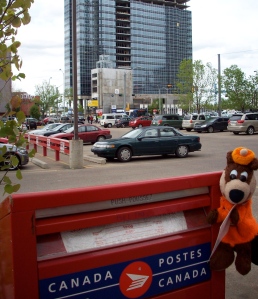 and he sent her a postcard from Edmonton. 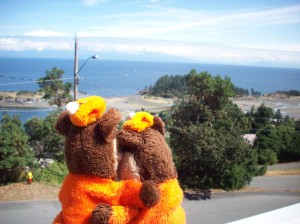 Later that summer, the “Bear Brothers” were reunited.

I wonder if Bear will try to sneak into my suitcase this week…?

…enough procrastination silliness…time for me to focus on those term papers…!