May 17, 2017 update: I recently gave a lecture entitled “Learning preferences and styles…can we separate fact from fiction?” I have gathered quite a few resources since this initial post on the learning styles debate (see ‘Controversy #1 below), so I’ll be returning to add a new update to this page soon (…once this semester is over!)

October 14, 2014 update: I just read an article called “To tweet or not to tweet: Academic freedom and social media” (The Conversation, 14 October 2014), so I thought I would revisit the following post on the topic of twitter and controversy. I have now included some “one year later updates” within this post. 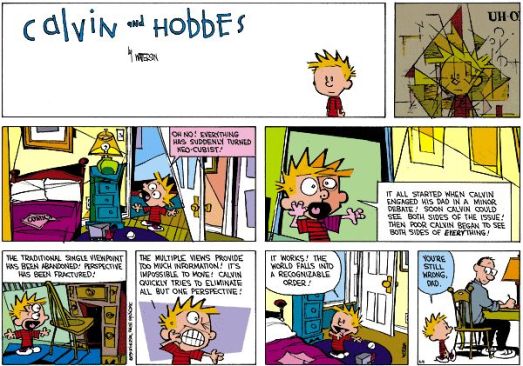 October 4, 2013: A couple of weeks ago I did something scary – via Twitter. No, I didn’t share an embarrassing photo…I shared my opinion. Twice. Gasp!  Not that sharing my opinion is scary (I do that all the time…), but it’s when I go out on a limb and publicly share my opinion on a supposed controversy that can be scary. Since it’s out there now in the Twitterverse, I thought I’d share here – especially since I can have more than 140 characters 🙂

Controversy #1: I shared a link to an educational debate. Shocking, I know!

Some students get fired up through classroom debate activities and can eloquently, convincingly, and passionately express their opinions. I, on the other hand, appreciate  time to run and hide ‘think-time’ in order to formulate my rebuttal (for another related Calvin and Hobbes comic  …see my post on “Brainstorming”)

-the televised debate on differentiated instruction was previously broadcast on Alberta Primetime, but you can learn more about @philmcrae’s perspectives by visiting his website

After my ‘scary’ tweet, I received an email asking for details to back up my position. Here are some examples of how I responded to the questions:

…and…I provided more details and then a list of a few references… In case you are interested in learning more about learning styles, I have listed those references at the end of this post.

1. Came across this editorial piece (published 5 November 2013) which also relates to the above tweet and debate: The Frontier Centre has jumped the shark by Jonathan Teghtmeyer (Alberta Teachers’ Association)

2. I continue to educate myself on this topic – and find the twitter hashtags (like #neurobollocks and #learningstyles) devoted to debunking brain and education myths quite entertaining and sometimes informative. Here is a popular 2013 article making its rounds in twitter circles: Do learners really know best? Urban legends in education by Paul A. Kirschner & Jeroen J.G. van Merriënboer (in Educational Psychologist, Vol 48, Issue 3) 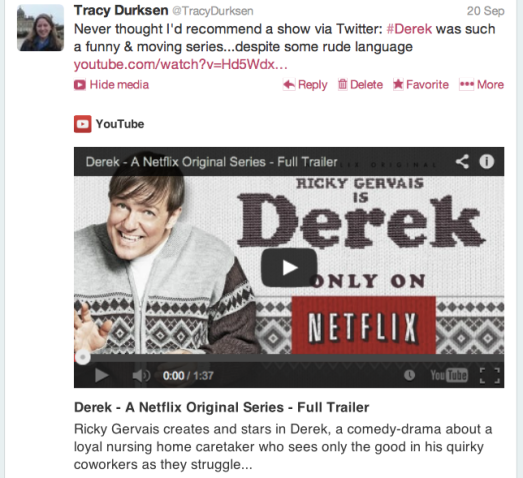 I (and I think it’s fair to say that I’m not the only one) have always equated Ricky Gervais with controversy …and his latest show was no exception (…a quick Google search will reveal why). But based on a friend’s positive reaction to the show, I decided to make up my own mind about “Derek” and watch the 7-episode series. My first job as a teenager was in a care home – and I loved it – so that is also why I was curious about this show. I was a little hesitant given Gervais’ history…and I am on the ‘prudish’ side when it comes to language…so I viewed the supposed touching dramatic-comedy – with a critical eye (…dare I say, judgmental eye). And, well…my critical eye turned into a tearful eye….and into a full sob by the end of the last episode

again without thinking of that last episode…)

I have often said that I judge a show according to the number of tears – either produced by laughter or sadness…and though I expected a few laughs, I never expected flowing tears. The tears were unexpected – probably because I had made up my mind about Gervais’ show…before even giving it a chance. I did however expect to cringe a lot (and I did). I quickly learned to tune out when ‘Kevin’ was speaking…except for that last episode when he delivered some heart-wrenching (…instead of just heart retching) lines. Gervais used the Mockumentary format as one way to capture the diverse perspectives of characters – allowing a range of opinions to come through on topics of prayer, the meaning of life, and on death (…and those were just in the final episode…!).

A series about kindness and forgiveness.

From the perspective of Ricky Gervais.

Now that was unexpected…

I never thought I would quote* Gervais…but…here it goes…

I have never had a reaction like the one I’m currently having to Derek. It’s genuinely heartwarming… I was really touched by the fact that people identified with him on a personal level…. Derek was meant to be different…and I welcome him to be a hero to anyone… Disabled or otherwise. Popular or ostracised… if anyone sees traits that they identify with then so be it. However different you are it’s nice to know there’s someone a bit like you.

I DO NOT recommend watching the second season of Derek!
…I couldn’t watch it all.
It was way too crude and we really didn’t need to see Derek going to the vet with a sick animal…

Well…that’s my 2 scary uses of Twitter.
Hmmm, maybe the blue Twitter bird would be a good Halloween costume…
Feel free to comment on these 2 controversies….
or post how you felt after sharing your opinions on an issue via social media.

A few references on learning styles: